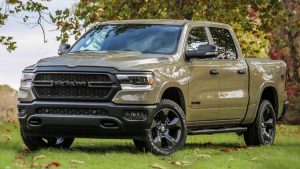 In a salute to the five service branches of the United States Armed Forces, as well as the brave individuals who served and serve in them, we are proud to introduce a special new series of Ram trucks called the “Built to Serve Editions.”

Each of the five U.S. military service branches will be honored with two specially selected exterior paint colors that evoke the spirit, the mission and history of that service. One of each branch’s “Built to Serve Edition” models will be offered in a new low-volume paint option exclusive to this program.

“Ram wants to honor those who are serving or have served the United States with distinction,” said Reid Bigland, Head of Ram Brand. “For Ram truck owners, whether military or civilian, ‘Built to Serve’ is a maxim that they can be proud to stand behind. We also want to bring together Ram owners who are not currently serving to make a difference in their communities. We launched our Ram Nation volunteer organization in 2015 as a way to give our Ram truck owners a way to be involved when there’s a need.”

The U.S. Armed Forces “Built to Serve Edition” Ram trucks will be offered in the following colors and limited numbers:

Ram “Built to Serve Edition” trucks feature other unique interior and exterior features that set them apart, including a United States flag and Built to Serve decal on each of the rear quarter panels.

Ram “Built to Serve Edition” packages are available on all body styles and all powertrains.

As part of the Built to Serve initiative, Ram is bringing further attention to its volunteer initiative called Ram Nation. Ram Nation has been organizing grassroots volunteer events since 2015 and, through the launch of the “Built to Serve Edition” trucks, is reinforcing its commitment to recognizing those who serve our nation and our communities.

Please watch the video below and, if so inspired, join our effort to amass at least 1.3 million volunteer hours by Veterans Day, 2020.