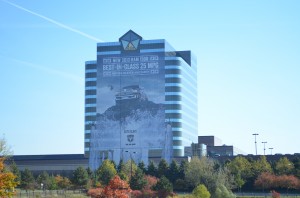 To celebrate the launch of the all-new 2013 Ram Trucks 1500, with Best-in-Class 25 highway mpg, Chrysler Group World Headquarters is covered in a massive building wrap that covers 15 floors, or 140 feet wide and 210 feet tall, and the truck image is 112 feet wide and 154 feet tall! It features the light-duty 2013 Ram 1500 sitting atop a waterfall with the convincing illusion that water is actually coming out of the building.

The wrap print and installation was one of many for Chrysler  HQ from Innovative Media.  Since its inception in 1996, Innovative Media owner Rick Jacob has taken a fledgling eight-person sign company to a 52-person company that helps customers – from mom-and-pop shops to huge, nationally recognized organizations – make an impact. Rick and his dedicated team design and produce wraps for vehicles, displays for stores, billboards, banners and, of course, the biggest wrap of all for Chrysler HQ.

Innovative Media has been responsible for about a dozen building wraps but none as grand as the new 2013 Ram 1500 wrap.  The whole process took about seven weeks, Rick says, from the time that Chrysler contacted him to putting the finishing touches on the final product on the glass façade of Chrysler HQ.

The Innovative Media crew had to first remove the previous building wrap, one that announced the arrival of the all-new 2013 Dodge Dart. For efficiency (and because the scaffolding only covers a third of Chrysler Group’s massive HQ building), they remove one section at a time and then actually put up the new section immediately after. The effect is that, for a few days, there are parts of two totally different building wraps up at the same time.

As you can see from the photos, the building wrap is perforated window film, which is easy to put up and remove while still allowing the employees inside the building to see out. The crew of just a few people got to say, “That’s a wrap” after just five days of working – a giant effort from one of the countless small businesses that drive America’s economy.

We documented the process of replacing the old wrap with the new one in the photo gallery below.

The new Ram building wrap is not only a celebration of an important new vehicle but also a re-affirmation of the Chrysler Group’s commitment to small business. You might think that a sign of such big proportions would necessarily have to be the work of a large company. But it’s not. It’s another example of the big impact that small businesses have in America, in this case, thanks to Innovative Media of Madison Heights, MI.

Stay tuned to the Working Blog, as we’ll have more from Rick and Innovative Media, including his advice, the ups, downs and ultimate rewards of being a small business owner, and why it’s essential to have graphics on your commercial vehicle.

If you get the chance to drive by Chrysler Group World Headquarters in Auburn Hills, MI, off of I-75, you’ll be treated to a sight that gives new meaning to the phrase “That’s a wrap!”